The European Parliament committee to investigate the use of Pegasus spyware in EU countries tackled the Catalangate espionage case on Tuesday. At the session, MEPs put questions to the head of the Spanish intelligence agency (CNI), Esperanza Casteleiro, who refused to answer, arguing that national legislation does not allow for them to reveal state secrets. The only place where the director said she can talk about CNI’s data and activities is in the Spanish Congress’ official secrets committee.

“Based on consistency and legal obligations, I can only reply reiterating that CNI activities are included in national law,” she said before adding that all the information from the agency is “classified as top secret.” These answers did not surprise Catalan pro-independence MEPs, with Toni Comín, from Junts per Catalunya, describing Casteleiro’s answers as “a joke.” Spain has been “the member state providing the worst response” regarding their activities, Comín said, adding that “the fact that the Spanish Congress has not yet created an investigation committee is a hint that Spain does not act as a normal democratic state.”

Truly unbelievable and an insult to all MPs:
The secret service chief from #Spain reads a bit of blah blah off the page, then simply refuses to answer our 28 questions and leaves the @EP_PegaInquiry.

During the ‘Committee of Inquiry to investigate the use of Pegasus and equivalent surveillance spyware’ (PEGA) at the European Parliament, some of the victims of Catalangate spyware were unable to speak about it to the politicians. “In previous sessions regarding other countries, victims have had a crucial role,” Diana Riba, Esquerra Republicana MEP, said following the committee.

The politician accused members of the Spanish People’s Party, the Socialists and Ciudadanos of cooperating to “silence” victims of Catalangate. For her, these parties are using the EU Parliament to hide “the bad use of spyware in Spain.” “They are hiding something very obvious; Spain is making massive and indiscriminate use of spyware such as Pegasus to get rid of the political dissidence,” she said. “However, they will not hide the ridiculousness of what Catalangate means,” Riba added.

On the other hand, Ciudadanos MEP Jordi Cañas believes that answering questions from members of the European Parliament is “not part of Casteleiro’s obligations.” For him, the goal of members in favor of Catalan independence was for everyone to “take for granted that the Spanish government is chasing them.” One of the experts that addressed the committee, who Cañas later quoted, wondered about the possibility of having “fake positives” among the results of Catalangate victims.

Gregorio Martín, emeritus professor of computational sciences at the University of València, analyzed some of the technical aspects of the Catalangate investigation from the University of Toronto-based tech crime research group Citizen Lab. In the report, there are “several technical mistakes” that could lead to “fallacies,” he said, despite not wanting to doubt the investigation.

One of the victims who could address the committee was the lawyer for the jailed, and now pardoned, Esquerra Republicana leaders, Andreu Van den Eynde. “No courts have taken any steps to start an investigation,” despite there being “no laws that allow spying on lawyers or citizens using Pegasus spyware,” he said during the committee. 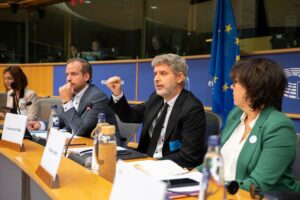 Catalangate was not the only espionage case in Spain under scrutiny by the PEGA committee. ‘El Confidencial’ journalist Ignacio Cembrero focused his speech on Morocco’s spying. He was one of the victims, along with members of the Spanish government, including interior minister Fernando Grande Marlaska. “There is only one government that could be interested in spying on Spain during the worst moment of the Moroccan-Spain political crisis,” he said.

Currently, the PEGA committee has a one-year mandate; however, members expect it to be extended for another three months but must await the response of the president of the EU parliament. “Neither the CNI nor the Spanish government has given any useful information to work with,” Saskia Bricmont, of the Greens parliamentary group, said during a press conference. One of the goals if the committee gets an extension is to use this remaining time to organize a trip to Spain, which “is lacking the political will of the Socialists and the European People’s Party groups.”

Unbelievable lack of response and reactions from Spanish authorities during the @EP_PegaInquiry hearing.
Spain, hiding again behind national security arguments.
Disrespectful of the work of our inquiry committee. pic.twitter.com/xmKfU4vTc7

During the afternoon session, the committee heard about the first draft report from MEP Sophie in ‘t Veld, who criticized states for not sharing enough information on the matter. Some of the members of the PEGA committee have asked for a “credible” report based on “facts” but not “hypothesis” or “deductions.” “The problem is that we are not getting enough information from authorities,” in ‘t Veld said, adding that proof cannot be rejected because they are from newspapers or organizations.

Catalangate is the name that Citizen Lab, a University of Toronto-based research group that reports on high-tech human rights abuses gave its investigation into the espionage of several Catalan pro-independence politicians, activists, and their close associates. It is “the largest forensically documented cluster of such attacks and infections on record,” the New Yorker published on 18 April. Among the victims, there is Catalan president Pere Aragonès and all former leaders since 2010.

Phones were infected using spyware programs Pegasus and Candiru. Pegasus, from Israeli company NSO Group, is known internationally for its previous infections of renowned people, such as murdered Saudi Arabian journalist Jamal Khashoggi, or members of Rwanda’s opposition party. Candiru, founded by former NSO Group employees, is not as well known but is similar to Pegasus.