Romeva: ‘The Spanish government was not aware of the extent of the problem they had created’

Interview with the foreign minister of Catalonia

Catalonia’s Foreign Minister Raül Romeva meets this newspaper while working to a tight schedule, with his next appointment being dinner with a group of European business people. He goes over the day’s events and recounts the five or six interviews that he has had with several media in Italian, French and English. As he lists them from memory, he forgets to mention the one with The Times of London. For months now, Raül Romeva has been running a daily marathon of diplomatic and press meetings that has forced him to work around the clock. Wednesday’s coup d’état means that he is having to put in even longer hours on every front.

—My first question is inevitable. Forty-eight hours ago Spain’s Guardia Civil raided your ministry and and detained an employee whose job is of a technical nature. What was the experience like, for you?
—Personally, I was totally outraged. Outraged by the impunity with which basic rights are being infringed upon, but also because they are trying to conceal the true nature of what is going on here. We are living in a State whose attitudes and logic are francoist or post-francoist. They arrested a ministry’s technician who was just doing his job. Politically, I am responsible and, ultimately, I should be held accountable. Intimidating people is just not on.

—As time goes by, we are hearing a growing number of voices who are concerned about what is going on. Are you surprised?
—I’m not. What has struck me is that certain statements which —until now— were only ever made in private are now being voiced out loud. This proves that the Spanish government was not aware of the extent of the problem they had created. During the European Commission’s press conference this morning, the spokesman was asked about the situation in Catalonia twelve times by reporters from different countries. In the middle of Germany’s election campaign, two of the country’s main newspapers put Catalonia on their front pages. The Spanish government might be surprised, but we are not.

—And are they?
—Europe knows Spain, they know what they they are capable of. There is a great deal of concern, especially over what is at stake. Everyone is asking us if this could turn into a violent conflict. We feel right at home on this playing field because everyone has seen what Catalonia is like for six years in a row: there have been zero incidents in the largest demonstrations that Europe has seen for decades. Our interlocutors are aware of this and it pushes Spain onto difficult terrain.

—Is violence the main worry you hear about.
—Yes. More than the referendum. On this, I’d like to point out that some countries are relatively enthusiastic about the vote, it makes them somewhat uncomfortable. But, to date, nobody has said that it mustn’t be held. And we should appreciate that. Nobody is unduly worried about us holding a referendum. Rather, they are alarmed by the possibility that Spain’s response might lead to violence.

—What is the question that you’ve been asked the most by your foreign interlocutors these days?
—What do you think Spain will do to stop the referendum?

—So what is your answer to that?
—Of course, I reply that I don’t know! But I immediately go on to explain that it is precisely the reaction that our international interlocutors are concerned about which has fully persuaded us that we have no alternative. When a referendum is called and the Spanish authorities respond by arresting public officials, breaching the postal secret, threatening news outlets, shutting down websites and applying article 155 [of the Spanish Constitution] without having the courage to invoke it in parliament … what are we supposed to do? I would not call that an attractive State. Quite the opposite. It is the smoking gun of the regression of basic rights. And everyone understands that. That’s why we are seeing people rallying in the streets of Valencia, Madrid, Bilbao, Granada and many other places. Independence is not the issue, here: preserving democracy and democratic rights is.

—Would you agree that this week’s events have had an effect on the position of foreign governments and public opinion?
—Absolutely.

—But so far we have seen few reactions, considering the gravity of what’s happened.
—It is very important to win the narrative battle. These days we have multiplied the number of contacts and we have always spoken about a state of exception. With everyone and everywhere. Because it is easy to prove: in a democracy you are never persecuted for your political views. They do not look through your post, to give a flagrant example, just because they believe you might support independence. Everyone can understand that. It is too obvious not to.

—Sure, but Europe is not getting involved. What else would have to happen for that?
—I sympathise with the concerns of some, but people must understand that it is precisely that concern that we are dealing with in the arena of diplomacy. We have never asked anyone any favours or to come out in support of independence. But the issue today is a problem that affects Europe’s democratic health. We want to draw attention to the fact that Spain’s actions today are detrimental to European democracy.

—How do you achieve that? Can you tell the people who are currently rallying in Arc de Triomf to show their support for the detainees that their voice will be heard by every government in the world?
—That is our job and it is what we are doing by every means possible. Make no mistake: Spain is very powerful, but it is not an almighty country. We are constantly striving to circulate information through situation reports, meetings with consuls and ambassadors, as well as media. Also with the communities of Catalans abroad and prominent Catalans who have a direct line of communication with the government of the country where they reside. Spain has an 18th century imperial diplomatic service, whereas we use citizens of the 21st century.

—It is remarkable to see how the firmest reactions so far have come from parliaments: Estonia, Denmark, the UK. How do you explain that?
—It’s to be expected. MPs enjoy greater freedom to speak their mind than ministers do. They can move more freely than the authorities. Any country will systematically defend the status quo and only change its position once there’s a fait accompli. In this case, I believe that the concern voiced by those MPs is hinting at a more widespread feeling which they can express without getting their country into trouble.

—There have been public displays of concern …
—And many more private ones!

—I can imagine. But in some instances, those voices have criticised the decisions of the Catalan Parliament and government, but have unanimously condemned the attitude of Rajoy’s cabinet. Why do you think Madrid taking such a big risk by doing something for which they might end up paying a very high price?
—They are not interpreting the facts correctly. They do not understand what is going on in Catalonia, that much is clear. Having said that, it is true that they are taking a big risk because, clearly, their narrative has no credibility abroad.

—Is it the narrative that matters or is it the facts?
—At any rate, the narrative is critically important. This is precisely one of Catalonia’s greatest strengths. Our nation has more than proven that it has a peaceful intent and our decisions, as its government, have always aimed to preserve the credibility and predictability of our actions. We do not ask third countries for help. We tell them what we will do and we do it. This is much appreciated, particularly when compared to Spain’s attitude. For years they have been saying that we would not take this step, that it was all a charade, that we would fall apart, that we wouldn’t find the way. So what do you expect people to think once they have seen that the Catalan government does as it says?

—Is that why your reaction to the coup d’état is to forge ahead with the referendum on October 1, without any changes?
—Most definitely. We must remain credible. And because we are credible and clear, we are respected. It’s become apparent this week: the Spanish government had no choice but to explain that what they had been saying was untrue or very wrong, whereas the Catalan government has done exactly what it had been telling other governments it would do.

—Does that mean that we are winning the battle of the narrative?
—I can tell you that many, many things have changed this week. 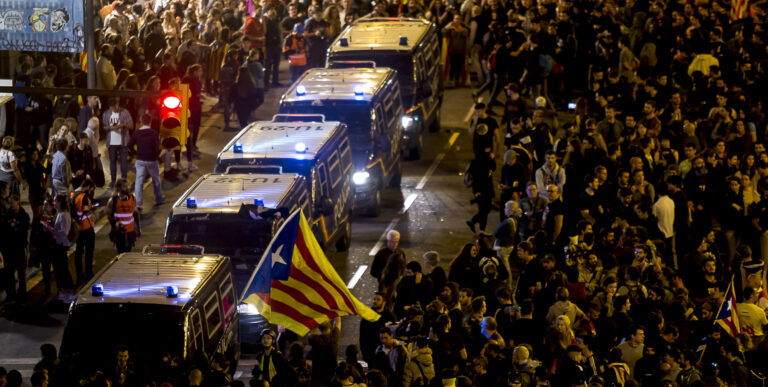 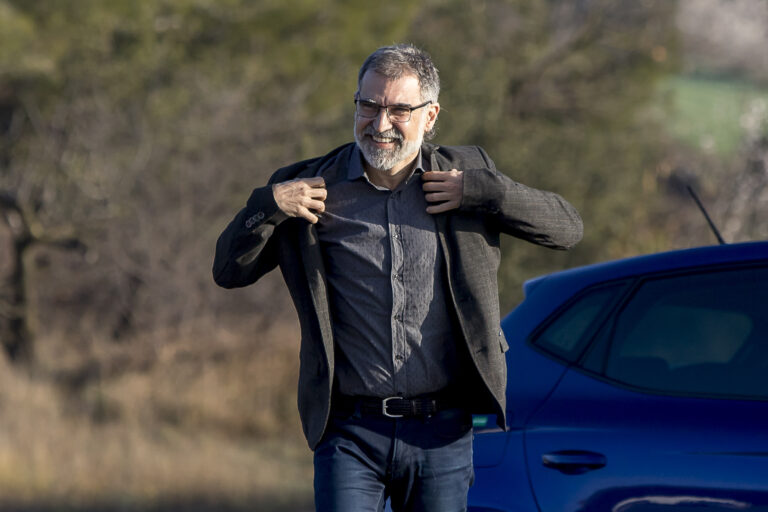 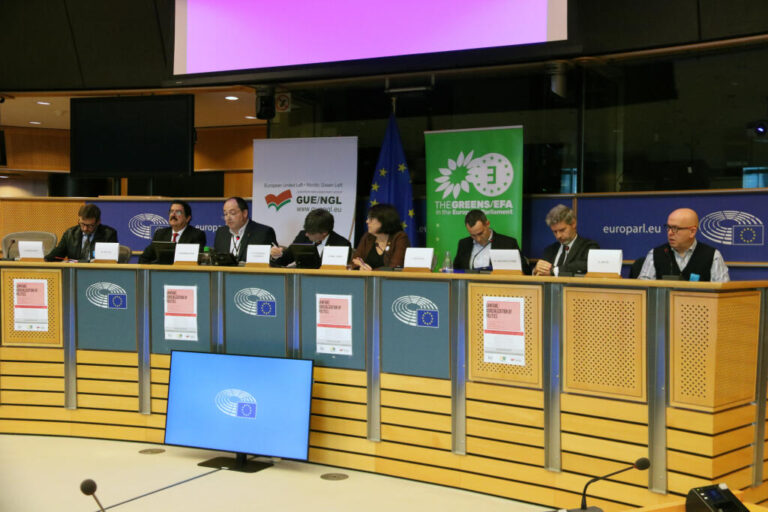 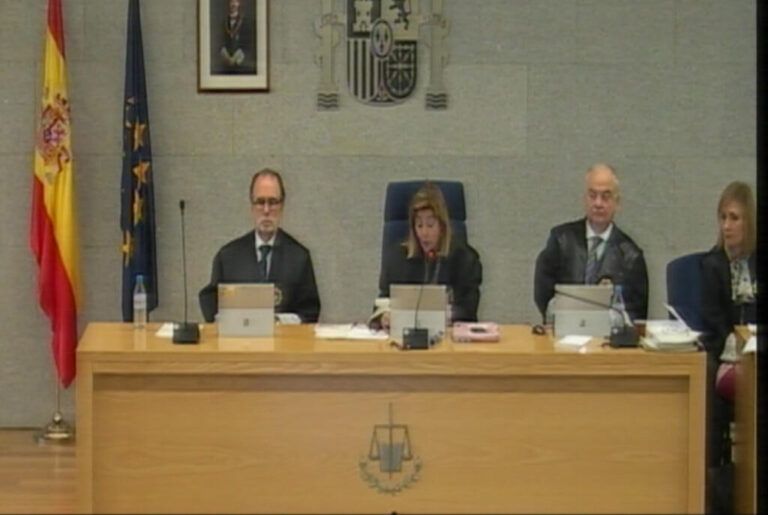 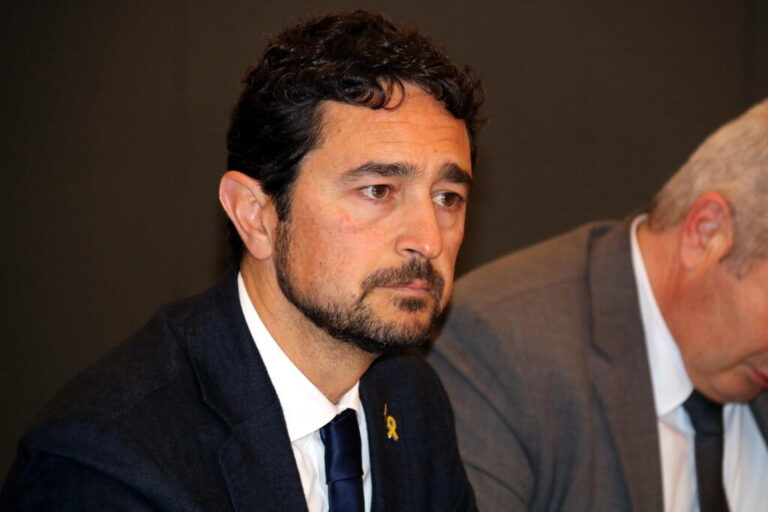 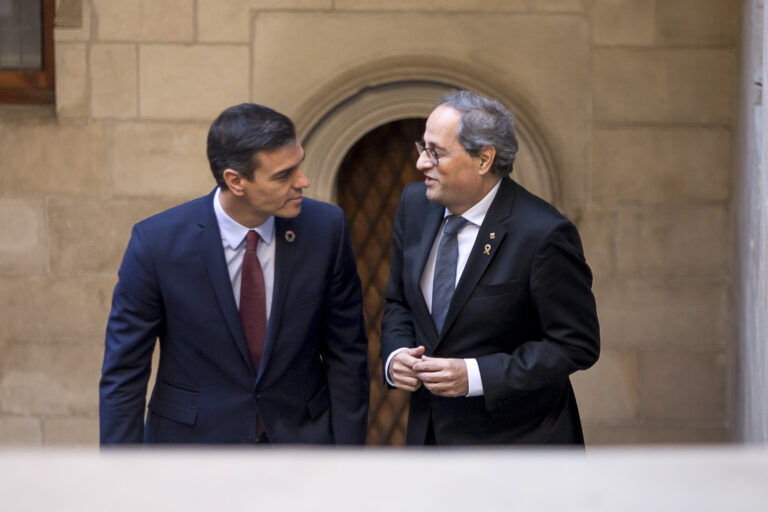 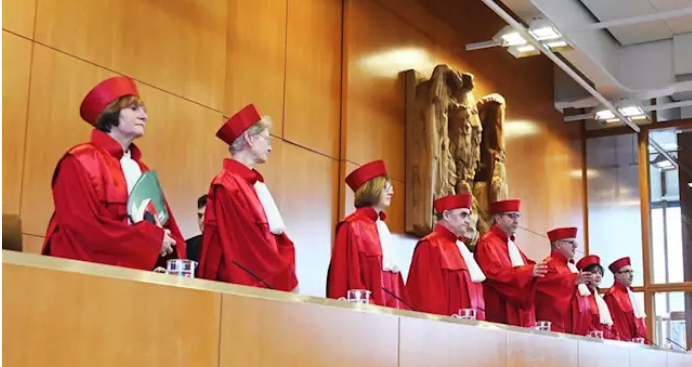 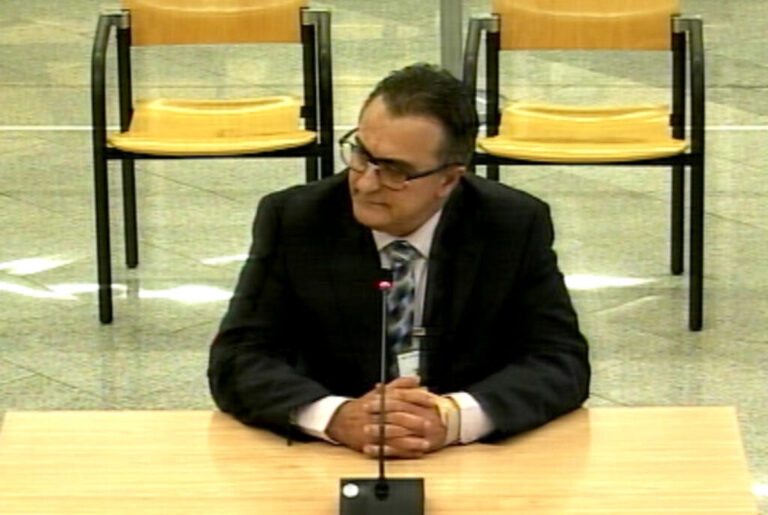 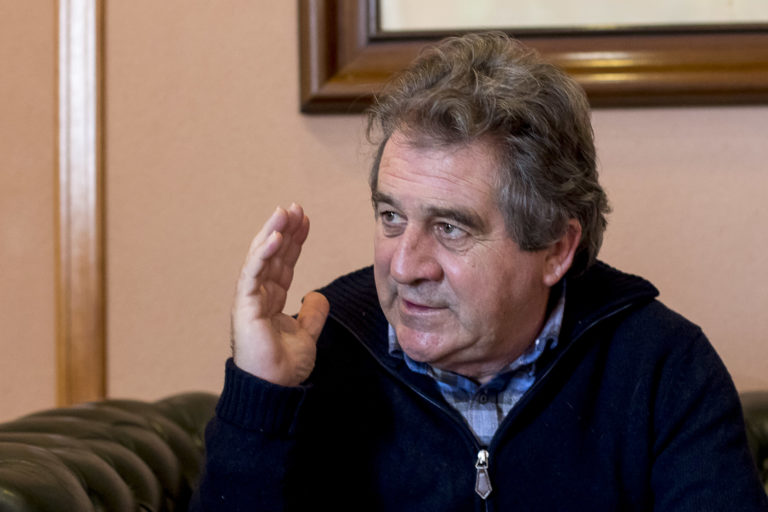 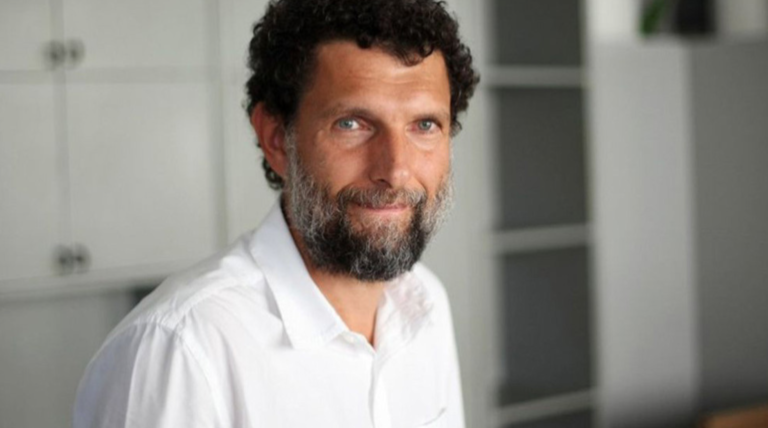 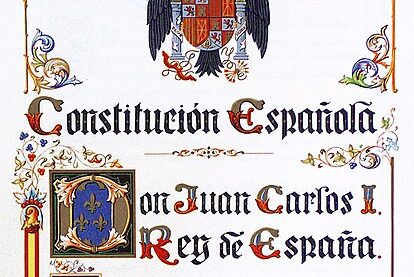 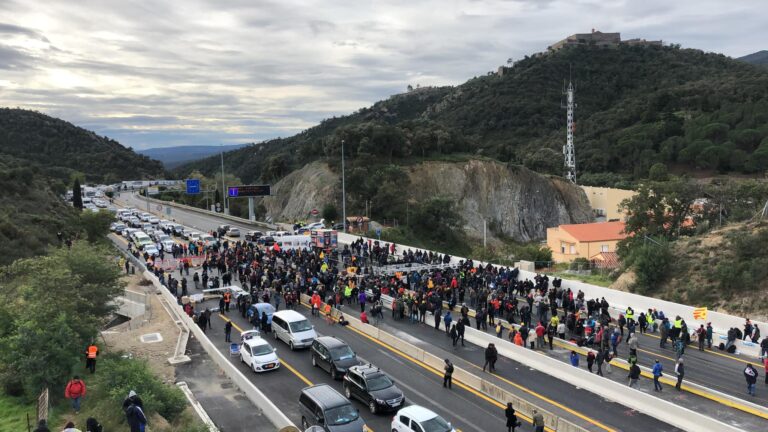 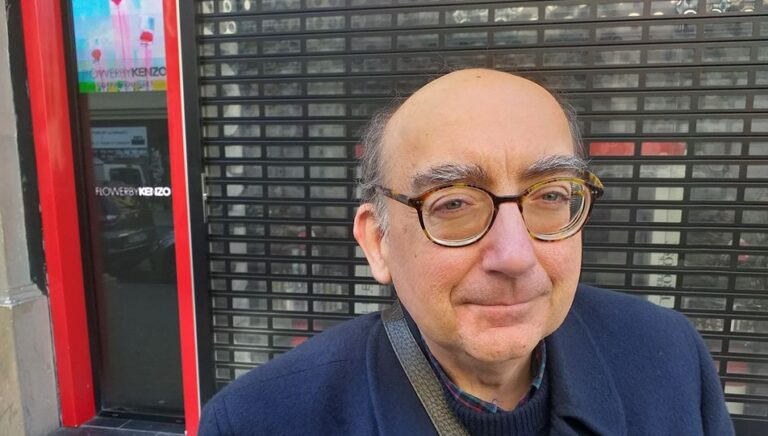 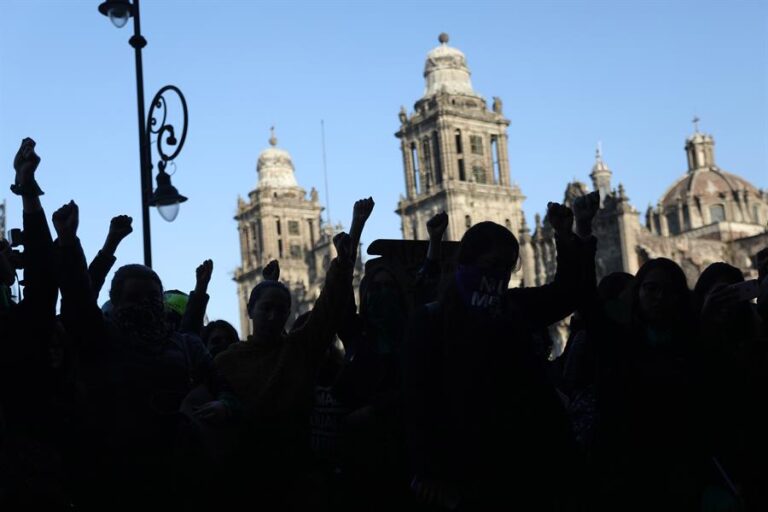