No s’han trobat resultats per a la teva cerca.

On October 1, Spanish police staged mass raids on a good deal of small villages where they knew they would encounter little resistance. Their only goal was to hurt people so that fear would spread among the population

Any being with a quantum of sensitivity was shaken by Sunday’s pictures of violence and brutality. I was particularly shocked by the attack on Callús, in El Bages (central Catalonia), the village where I was born and where I live. The population of Callús is just under two thousand and my older brother, Joan Badia, is the current mayor.

At half past five in the morning I got to Escola Joventut [the local school that is used as a polling station]. There was a crowd outside. Everyone was whispering, but the mood was happy, excited and emotional, with a drop of uncertainty. I found myself chatting to people that I would usually only wave to whenever we pass each other. Everyone was persuaded that we would be able to open up the polling station because the Catalan police would not shut it down. And we were right. They turned up at about half past eight and saw this:

Shortly afterwards, I went home. My mum had asked me if I could take her to vote at about half past nine and I dropped by to tell her not to rush because we would be better off going a bit later, as the place was packed. Once I got home, I was hit by the pictures of those animals mauling their way into the polling station in Sant Julià de Ramis, where the president was due to vote. Little by little, news of attacks here and there began to trickle in.

At about a quarter past ten, the doorbell rang. It was my brother Isidre. He was very upset and told me what had happened in Callús. His voice quavered with emotion. He had recorded everything. As we watched the footage, it sent shivers down my spine. With the excuse of seizing the ballot boxes, dozens upon dozens of thugs aimed to humiliate and trample over a whole village. There is a chilling moment on the video: when they push the mayor and everybody cries out as one. I’ve imagined the minutes leading up to that cry: everyone gripped by tension, sitting on the ground with their mouths shut, while they watch those animals arrive, with covered faces and their threatening, aggressive demeanour. I’ve imagined, amid the silence, a throbbing anxiety as the only audible sound. But perhaps what I find most moving is the people’s call as the automatons are violently trying to break through: “We are peaceful people!”

Watching and listening to that, picturing the rage and impotence of all the people in Callús still brings tears to my eyes. We are peaceful people, indeed. They are not. Watch it here:

And here you will find some photos that will help you decide if, as they claim, their actions were “proportionate”. 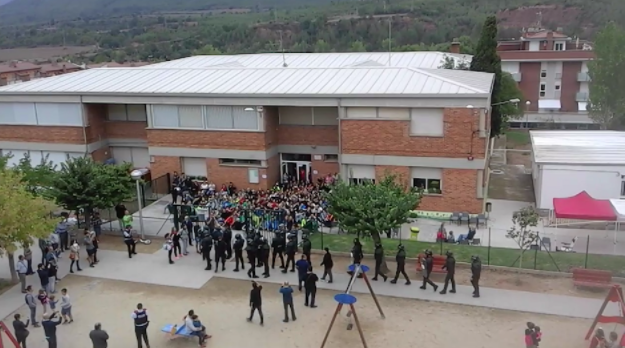 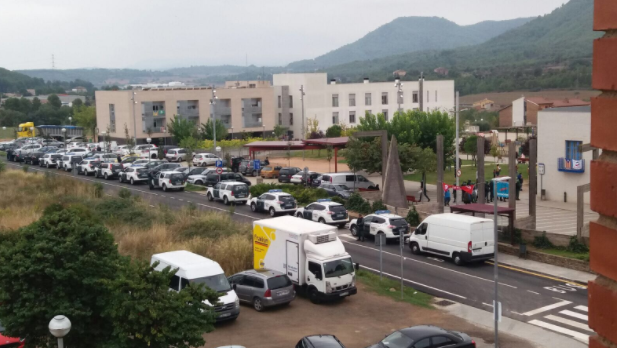 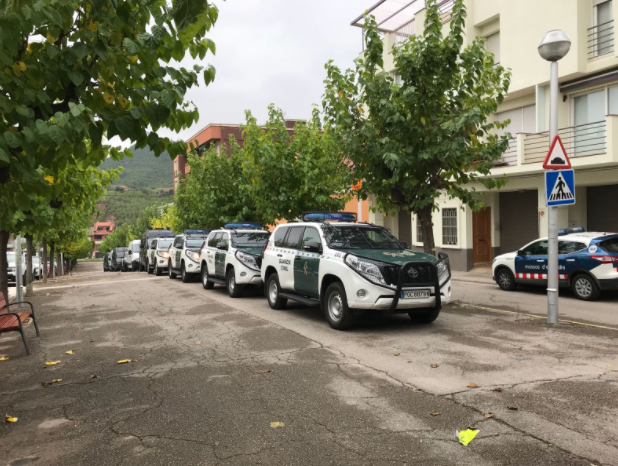 The second incident that made me shudder happened in the village of Fonollosa, population about 250. The local mayor is called Eloi Hernàndez i Mosella. I had the pleasure of being his Catalan teacher for four years. He was, without a doubt, one of my best students. In his last year in High School, he asked me to oversee his research project. It was an unforgettable experience: in the attic at home, he had come across an 18th century diary that had belonged to an ancestor of his named Salvador Devant and Eloi wanted to study the document. We both completed the project with trepidation, both at school and outside. He worked very hard: he visited as many archives as was needed to cross-check the information in the diary. I recall how we travelled to Girona together one winter day to visit Xavier Torres i Sans, a leading expert in ancient diaries. The project won several awards, the dearest of which must have been Premi Baldiri Reixac, given out in L’Espluga de Francolí. That’s where I met Eloi’s dad, who told me that he had moved to Catalonia in 1975 and had attended evening lessons at a teacher training college. One of his teachers happened to be my brother Joan. In more than one way, Eloi is a gifted individual. When he was still a student in my secondary school, he ran the local drama group, which was well-known locally and got all the young people involved. As a man and a mayor, he is exceptional.

On Sunday, Fonollosa mayor Eloi Hernàndez i Mosella was paid a most “proportionate” visit by these gentlemen:

By the afternoon, an audio recording of Eloi’s cracked, tearful voice had gone viral. It is a chilling document:

The third video that shocked me was recorded at Institut Quercus, a secondary school in Sant Joan de Vilatorrada [also used as a polling station]. Quercus is my own high school: I was a teacher there for nine years, four of them on the management board. That is where I met Marta, who still works there, and Eloi, of course. Whenever I think about teaching as a profession, Quercus springs to mind. It is a very dynamic, well-run school. A few months ago I wrote about the great scheme that the school had devised to encourage students to read, a project that only a team of teachers who believe in their profession could ever pull through.

I hadn’t been to Quercus for a long time, but I spent long hours in the school on Friday and Saturday, with Marta and our children. The polling place was watched over by parents and, most of all, by students, former students and teachers. It was an intense time and nobody could anticipate that this would happen on Sunday:

Everyone in Sant Joan de Vilatorrada suspects the reason why those gentlemen paid the place a visit. They were after a particular picture. This one: 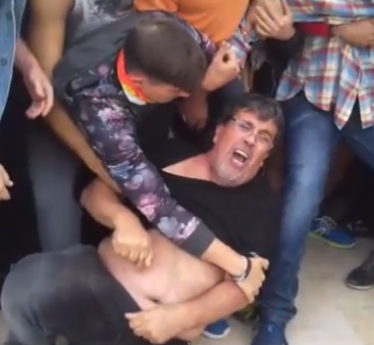 And they wanted it as retribution for this one: 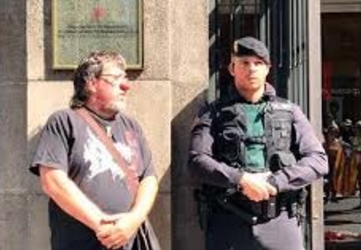 Jordi Pesarrodona is a much-loved local clown in the El Bages county. He is the founder and the soul of Gog i Magog, a clown company. He also happens to be an ERC elected councilor in the local government of Sant Joan de Vilatorrada. Early that morning, those saddos, clad in Action Man fatigues, went to Escola Joncadella and found Jordi in the front row. Resistance was fierce and they never managed to get into the school. But they didn’t need to. They had their revenge by leaving Jordi sprawled on the ground, humiliated.

Therefore, they chose to go to Sant Joan de Vilatorrada to degrade Jordi. Everybody knows why they went to Fonollosa, too: it is the hometown of David Bonvehí, the executive coordinator of PDECat [the Catalan president’s political party]. These two attacks had a symbolic nature, as in Sant Julià de Ramis (where President Puigdemont was expected to cast his vote), Sabadell (Speaker Carme Forcadell), Sant Vicenç dels Horts (Vice President Junqueras), Sant Carles de la Ràpita (Josep Lluís Salvadó, who was doubly humiliated [as one of the senior officials arrested on September 20]). They had also planned to storm the polling station in Verges, the birthplace of MP Lluís Llach [a popular songwriter], but the local residents succeeded in closing off all the roads that lead to their village. Still, revenge came early on Wednesday morning, when someone punctured the tyres of every car they could find parked in the streets of Verges. Last but not least, are the capitals of the four Catalan provinces, which also hold a symbolic meaning to them.

They tried to wipe the smile off our faces by shoving, groping, gassing and beating us with batons. To vent some rage, I suggest you watch these two videos. The first was recorded in Sant Mori (Alt Empordà). It seems that all the local residents of this tiny village had voted early, secreted away their one ballot box and waited for the Spanish Guardia Civil outside the polling station, at a table set for lunch.

The second video was filmed in Sant Ramon (La Segarra). The local folk decided to defy the Spanish officers by mocking them and, as a result, they ended up looking absurdly over the top. You can watch it here.

So why did they raid so many small villages? Have you thought about that? If this was about seizing boxes full of ballots, why not target Barcelona city and its larger metropolitan area? Had they seized every ballot box in the capital, they would have rendered the vote null, indeed. The answer is clear: they went to tiny villages so as to encounter little resistance. And they raided them in outrageously high numbers. Their orders were to hurt people and spread fear. Seizing ballot boxes was merely an excuse. Their true intention was to instil fear: for all Catalonia to be afraid. Therefore, the more circulating news, the better for their psychological warfare. And they picked a cowardly way of going about it: dozens upon dozens of fully-armed officers wearing helmets against a handful of men and women in small villages, who raised their hands and shouted “We are peaceful people!”

They are as cowardly as those who send and applaud them: Rajoy, Sáenz, Rivera, Arrimadas, Guerra… And those who keep quiet and watch: P. Sánchez, Iceta, Ros (Coscubiela?)… All of them oppose the referendum, not because it is “unlawful”, but because they know that they would lose it.