The fiscal drainage of Catalonia

Catalonia suffers from a significant fiscal drainage towards Spain in the form of a large fiscal deficit. This is the difference between the Central Government’s public sector spending in Catalonia and the resources extracted from this Autonomous Community, mainly through taxation, by the Central Government.

Fiscal deficit data, all calculated using the same methodology, is available from 1986 until 2011. The average for 1986-2011 is 8% of GDP with a standard deviation around this average of only 0.9. Therefore, one can speak of a structural fiscal deficit that affects the Catalan economy recurrently. 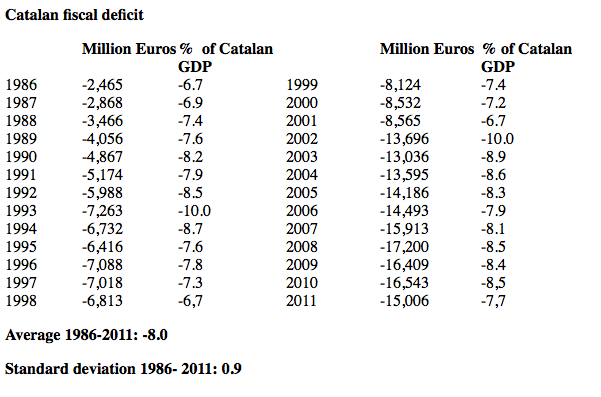 Another way to understand this deficit drainage is to consider the fact that Catalonia contributes 19.5% to Central Government revenues via taxes and only receives 14% of central government spending, either in investment or other public services, while the weight of its population is 16%. These percentages are also the average for the period 1986-2011 and remain constant throughout those years.

Furthermore, we can note that although the fiscal deficit in terms of GDP remains more or less constant over time, it is not constant in terms of euros per inhabitant once the effect of inflation is removed. Between 1986 and 2011, the annual fiscal deficit for every Catalan has gone up from 1,076 to 2,055 euros. This is because the income of Catalonia has grown in real terms during this period.

This fiscal drainage is an important obstacle for the Catalan economy. The consequences are that it discourages growth and reduces welfare for the Catalans. Spain's Central Government has historically refused to correct the problem. Catalonia has often tried to negotiate better fiscal treatment from the Central Government, but without success. In consequence, the only solution is the secession of Catalonia from Spain. However, the reasons to ask for Catalonia’s secession are not only economic. There are other important reasons for independence, such as the continuous attacks of Spain's Central Government against Catalonia’s own culture and language. We hope we do not have to wait a long time to see Catalonia as an independent State.